We’re looking at UK Grime and how the genre has permeated the British chart, creating a time of unprecedented chart success. Interestingly, many of the prominent artists are signed to their own independent labels; finding success away from the major labels.

They have total creative control over their output and have blossomed away from the powerful distribution networks of the big boys. Consider Giggs, who never had an album reach the Top 20 until he went fully independent and hit #2 with Landlord.

We’re going to take you on a journey through the history of the genre and how we got to this stage. But first let’s quickly explain what Grime is:


Grime emerged from Garage and stylistically draws on this as well as hip-hop. The beats and rhymes are usually harsh and hard-hitting. It’s a fast-paced and hyped genre that grew from speed garage.

“Grime sounds as if it had been made for a boxing gym, one where the fighters have a lot of punching to do but not much room to move.” – Sasha Frere-Jones, The New Yorker

Like Garage, the beats are typically choppy and have an oft-kilter rhyme structure supports this. The raps bring the ethos of boom bap hip-hop, no Auto-Tune or singing, just straight rapping.

In the past couple of years we have seen Skepta win the 2016 Mercury Prize for Konnichiwa; this year Stormzy’s Gang Signs & Prayer become the first Grime album to top the UK Album Chart. Both are independent artists achieving big things thanks to the power of the internet. 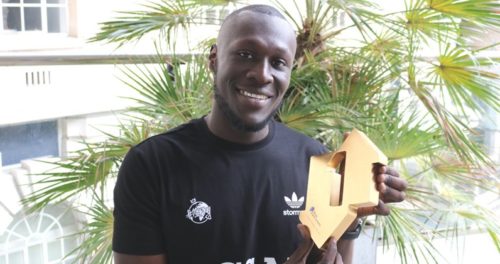 Stormzy was named on the BBC Sound of 2015 shortlist of up and coming artists alongside fellow rappers George the Poet and Novelist. Unlike them, Stormzy was catapulted into mainstream awareness with the power of his viral smash “Shut Up”. A YouTube freestyle that has racked up over 54 million views on YouTube since 2015.

Grime’s popularity has spread throughout the culture, The Guardian called Wiley, ‘perhaps the most influential musician working in Britain today”. Last year Culture Minister Matt Hancock claimed to be fan of Skepta, but couldn’t name a single track. This is worse bandwagon jumping than Tom Watson’s dab in parliament.

To understand how we got here let’s have a quick look back at the history of the genre:

Grime emerged from Garage in the late 1990s, Wiley was at the forefront of moving the genre in a darker direction. He’s a fascinating character, regarded as the Godfather because he’s been at the centre of things throughout its history.

Wiley was part of Pay As U Go Cartel, a Garage crew with a horrendously dated name that appeared on Top of the Pops to perform “Champagne Dance” in 2002. For anyone too young to remember Top of the Pops, it was a paedophile ring / TV show run by Jimmy Savile.

Wiley and other young members of the Garage scene wanted to go in a new direction that focused on the rapper rather than the DJ as the central figure. As we have previously discussed, Garage rappers mainly operated as party hype men. The new generation of rappers wanted more attention on lyricism and gritty tales of urban life.

This early genre was nebulous and had several names, Wiley said of this early period:

“It’s dark garage really. It’s music that was trying to be garage that didn’t really fit in, so therefore became its own thing.”

The first big album to really exhibit this genre of “grimey” Garage was So Solid Crew’s They Don’t Know [2001]. The first true Grime album wouldn’t come until 2003 when Wiley-protégé Dizzee Rascal released the landmark Boy in da Corner. 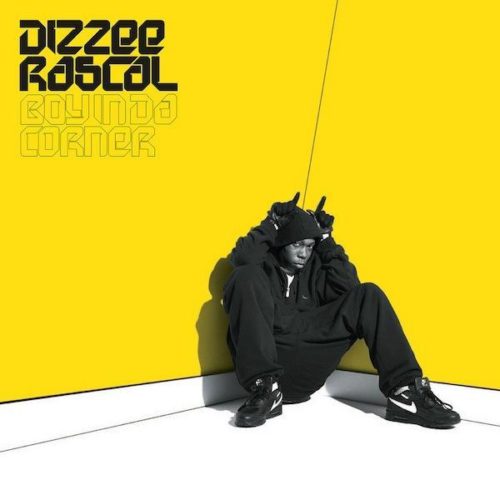 At this point, no one knew what to call this new genre, the Guardian’s original review of the album described it as Garage.

Boy in da Corner’s gruff bass frequencies and clattering synthesisers distinguished it from the 2-Step beats of Garage. While Dizzee’s rhymes offered an unflinching perspective of the disillusioned black youth.

Wiley’s “Wot Do U Call It?” [2004] dubbed the genre Eskibeat, something he’s been trying to make happen ever since. He also distanced himself from the Garage label: 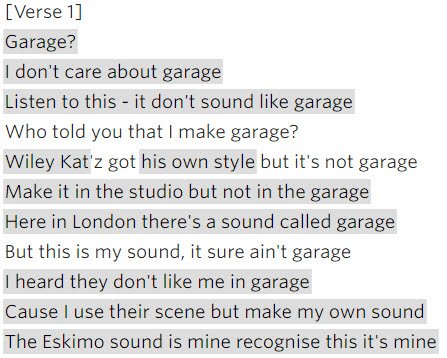 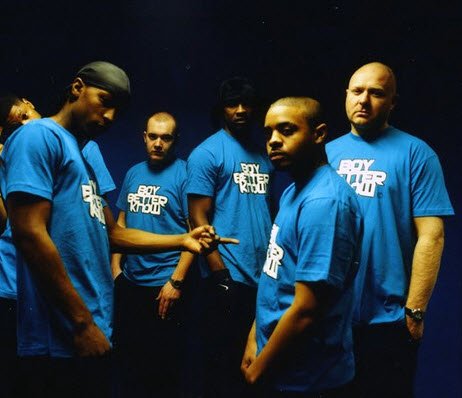 2004 was a breakthrough year for Grime [as it was now known] and saw the release of big tracks like Lethal Bizzle’s “Pow! (Forward)” and Kano’s “P’s and Q’s”. 2005 saw the inception of Boy Better Know, a collective of Grime MCs headed by Skepta and JME. This independent label had a do-it-yourself attitude and grew to be at the forefront of the genre.

“Like literally, there is no money that record labels can offer us no more, it’s dead / It’s just, there’s no point” – Skepta, Speakerbox [2017]

The growth of YouTube contributed to artists’ exposure. It has become a hub for aspiring Grime acts, taking the place of pirate radio stations.

“Scroll through the comments on the latest videos and you’ll see the same usernames cropping up again and again, discussing tracks with the same passion you’d have previously heard during radio call-ins.” – Morgan Keyz, music video director

The mid-to-late 2000s saw many UK rappers crossover and make commercial waves with hits outside of the Grime blueprint. Rappers such as Chipmunk, Tinchy Stryder and Tinie Tempah chose this direction, Chip received the most flack for the decision.

I Am Chipmunk was released in 2009, showcasing a radio-friendly style of rap, far-removed from Grime. Chipmunk was signed to Columbia and the album debuted at #2 in the charts, producing three top-ten hits in succession. 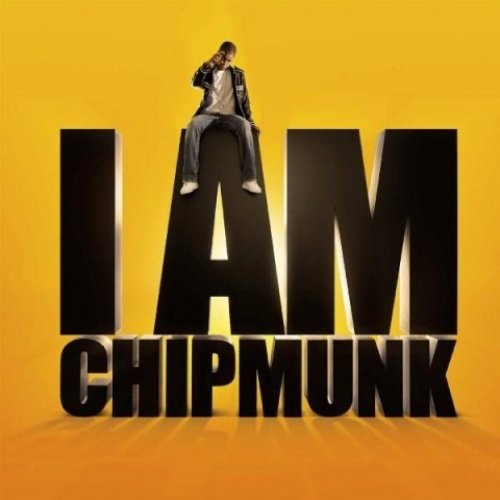 It’s an album that is typical of formulaic major label hip-hop releases, it hits all the major demographics and subjects. There are songs for the ladies, for hardcore rap fans and emotional tracks about loss and heartbreak. I Am Chipmunk, feels like a rap album by the numbers with subjects carefully chosen by focus groups to appeal to everyone.

Even Wiley and Skepta hit the charts with a more mainstream sound, they recorded matching songs about their Rolexes; “Wearing My Rolex” and “Rolex Sweep” were released in 2008 and 2009 respectively. Wiley’s track managed to hit #2 in the UK Singles chart, because his was released on Warner Music, while Skepta remained independent and peaked at #86. These tracks had a marked impact on the pop rap of Chipmunk.

Straight Grime music wasn’t selling at this time and artists were having to bend to the will of the major labels. Grime on independent labels was doing even worse, Bashy’s Catch Me If You Can album failed to chart, despite having a commercial sound.

Wiley’s 2011 album 100% Publishing showcased the genre in its purest form, recorded completely independently from a label. It was written, produced and mastered by the man himself and didn’t crack the Top 100.

Fast forward, 2 years and Wiley went commercial again with his next project, The Ascent. Released on Warner, it peaked at #26. Wiley got his first #1 single with 2012’s “Heatwave” a summer jam about eating ice cream and drinking slush puppies with both flavours.

Grime was in the commercial doldrums in the late 2000s and early 2010s, with sales hurt by illegal downloads and the dip in traditional music sales. The only UK rap that was selling was the commercial stuff and this hinged on the backing of major record labels.

The resurgence for the genre came when technology finally caught up. Today YouTube and streaming has allowed artists to capitalise on the internet to make real money and hit the charts.

In 2014, streaming became a contributing factor in the UK charts, allowing artists to translate their online buzz into mainstream success. The power of streaming can be seen in the fact that Drake’s “One Dance” was able to dominate the UK Charts for three months, becoming the first song streamed one billion times on Spotify. In early 2017, Kanye West’s The Life of Pablo became the first streaming-only album to go Platinum.

Kanye is important to our story because his performance at the 2015 Brit Awards provided a breakthrough moment for Grime. He appeared backed by 30 Grime MCs dressed in all black tracksuits, bopping away and shooting flamethrowers. It was a striking performance and for a few minutes people forgot that the Brits are fucking terrible

“The Brits is out of my league. Unless I make another ‘Heatwave’ or something that’ll sell millions and millions for 10 years solid, the Brits are never gonna look at me. But this year, Kanye West opened a door that’s closed to most of us. There’s no way Skepta or JME or Novelist or Stormzy were gonna get onstage without Kanye doing that.” – Wiley, NME [2015]

Skepta organised the stunt and was the first to take advantage of the major exposure given to him.

Skepta’s 2016 album Konnichiwa entered the UK Album Chart at #2. Released on Boy Better Know, it received a huge boost in exposure thanks to a major Drake co-sign. Three days after release Drake reportedly signed to the label and sported a BBK tattoo. Konnichiwa received critical acclaim and took the 2016 Mercury Prize – awarded to the best album from the year. 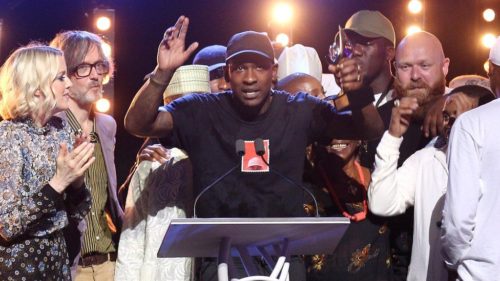 Successful Grime projects followed from Giggs, Kano and Wiley, authentic albums which uniquely tackled real life issues. Whereas the most recent Tinie Tempah album, Youth, lacks this intensity. It is a major label release that tries to offer something to everyone, much like I Am Chipmunk.

This is why many rappers will always have mixtapes that are far superior to their albums, because the label doesn’t get involved to alter the project. It further explains why Konnichiwa could win the Mercury Prize, because Skepta had total creative control over the sound.

Stormzy followed in the footsteps of Boy Better Know and set up his own independent label, #MERKY.

#MERKY is officially an indie label, by God’s grace.

Gang Signs & Prayer became the first pure Grime album to ever reach number one, it also managed to out-stream Drake’s Views, with 13.9 million in the first week. Marvel at the power of independent Grime music in 2017.

Stormzy is now worth £1.5 million, which was unthinkable for a relatively new independent artist until very recently. Indie rappers have learned that they can achieve unthinkable success without the need for major labels. It’s easy to market yourself online, and once you get tracks on Spotify and YouTube there’s the opportunity to make money without a record deal.

“Rappers are selling out tours from coming on Charlie Sloth’s show and rapping. That to me is beautiful” – Akala

Meanwhile, in America Desiigner blew up fast with his viral smash, “Panda” which reached #1 in US Singles Chart in February 2016. Shortly afterwards, the rapper signed a contract with Def Jam, seeking refuge with the major labels rather than going solo like Stormzy. Chance the Rapper is one of few successful independent American rappers, it is interesting that few are following his lead and moving in the indie direction.

It’s an exciting time for Grime and the recent exposure should see the genre grow to even greater heights. With many of the artists looking after themselves and becoming very rich it should only be a matter of time before other genres replicate the independent business model.

The power of the internet can distribute your music as far as any major label. If Stormzy can out-stream Views based on his own rampant self-promotion why can’t someone else? We are in an interesting time for the music industry, the traditional major label model is looking evermore obsolete.