Today we’re going to look at the music video for Migos’ “T-Shirt” the second single from their breakout album Culture. The rap trio recently came into the mainstream with their hit, “Bad and Boujee”; we could have analysed this video but it’s standard rap fodder. The scenes goes like this: Rapping in the hood – Rapping in a chicken shop – Girls dancing – Riding quad bikes through the ghetto.


The best bit? Lil Uzi Vert’s scenes were shot to hide how comically small he is. They use many optical illusions to achieve this, like putting him on the bottom of the hill and having everyone crouch down to his level while he raps.

The video for “T-Shirt” is uniquely bizarre and unnecessarily complex for song about selling cocaine. The lesson is that you should buy your coke from Migos because it’s a high quality product; you know this becuase it’s as white as their t-shirts. Perhaps Migos use Daz. Unfortunately nobody in the video wears anything close to a t-shirt of any colour so we miss out on seeing these whiter than whites.

For the lames reading this who have never had to buy a kilo of cocaine, here’s an explanation:

Migos are the stars of the show, they’re a bit confusing so bear with me while I attempt to explain them. They are:

Quavo – The leader and the most talented. Quavo is easiest to hear because he usually sings his verses and performs most of the hooks.

Offset – he sounds a bit like Quavo, but isn’t Quavo. It’s very easy to get those two confused.

Takeoff – He’s the easiest one to distinguish because his voice is a bit deeper than the others, but you have to know what you’re listening for.

These guys are really fucking difficult to tell apart musically and physically. They are directly related, according to wiki “Quavo is Takeoff’s uncle, and Offset is Quavo’s cousin”. Further, they always wear sunglasses, which makes it even harder to pick out each Migo. 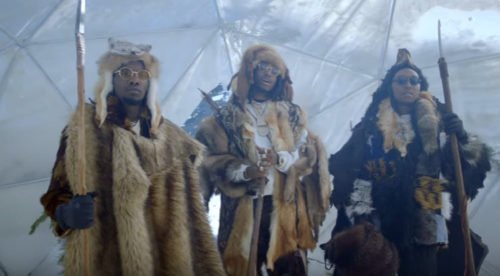 All three Migos employ the group’s trademark flow, which involes triplets delivered in a a jittery, high-energy stop-start manner.

They’re the John Wick of hip-hop, with their infectious high energy rhymes that offer low brow entertainment of the highest luxury. Much like how John Wick wears his fancy suits to give the film an air of sophistication. The guys know all about this and recorded an entire song inspired by the film, the best bit is when Takeoff raps the plot of the first film, like it’s his real life.

[For reference 03:02 means that the scene occurs at 3 minutes and 2 seconds occurs into the video. I’m also sure that I’ve mixed up the individual Migos many times below.] 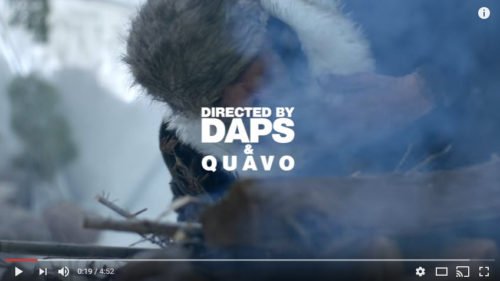 We start by seeing a bearded man starting a fire in the snowy woods, while we learn Quavo has turned his hand to directing this effort. He’s busying himself cooking up high-quality drugs. 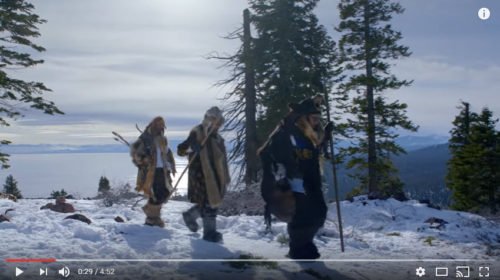 Our first spotting of Migos sees the lads have raided their mothers’ fur coats for their icy journey. They have armed themselves with spears and a bow and arrow for their this trip into the winter terrain. 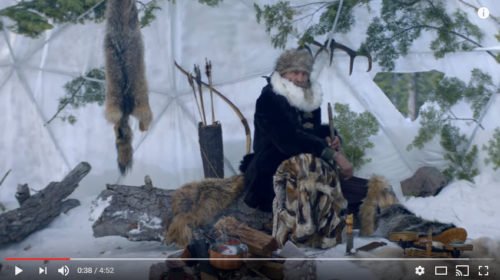 They enter a weird igloo thing to meet the dude with the fire, he gruffly welcomes them. 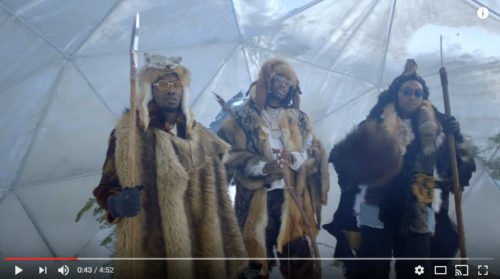 Quavo shoots back “seventeen five, same colour t-shirt” while Takeoff throws some money to Cave Man. Appropriately, it lands next to some scales.

This shout out the chorus implies that when Migos buy their cocaine, they have to go all the way to the mountains to get it. All three of them made the trip, so who’s running the business while they’re away? 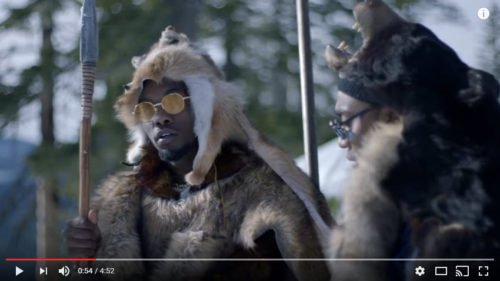 Director Quavo decides that’s enough acting for one video, time to get to business. The instrumental kicks in and while we’re waiting for someone to rap Migos do some posing with their spears.

Time for a quick dance!

Oh yes that’s the good stuff. Now we’re getting into the track. Rappers are too cool to dance these days, but not Migos. They don’t care how much snow there is, it’s time to bop along to the beat. 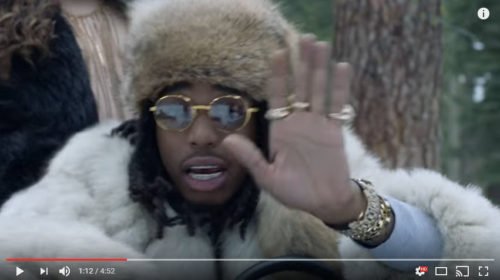 Quavo raps the hook while wearing a grill, another throwback! Look at how much jewellery he’s wearing into these arctic conditions. From what I can tell the only supplies Migos brought with them was the bag of money they gave to Cave Man, jewellery and weed. Fortunately, they’ve just bought a kilogram of cocaine so they should be fine. 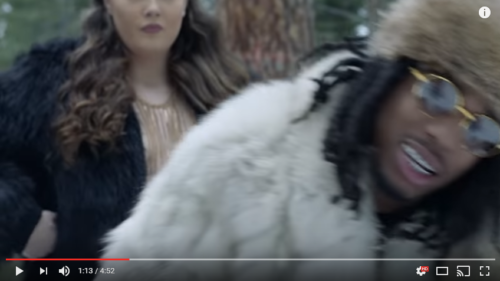 Quavo moves his head and reveals a woman behind him, at this point we only get to see the bottom half of her face. Takeoff starts his verse shortly after and he is also behind joined by a lady behind him, we don’t get to see her face, just her chest in the background. This lack of regard for putting these ladies fully on camera suggests they won’t become major characters in this narrative.

There is little character development of the female characters in this edition of The Cocaine Adventures of Migos, they mainly stand around scowling throughout the video. Exhibit B: 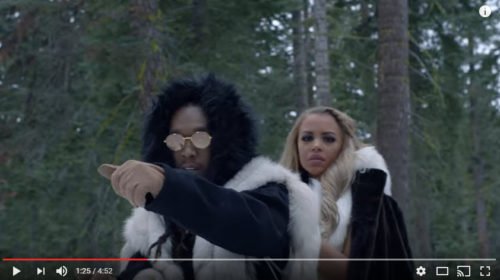 The director finally bothers to show the face of Takeoff’s companion. She doesn’t look like she’s happy to be there, I was hoping she came to rescue Migos from an icy death, but her expression suggests she’s part of the cocaine expedition, eager to get home.

She’s probably wondering why Takeoff keeps rapping when there are more pressing issues like getting home before hypothermia sets in. 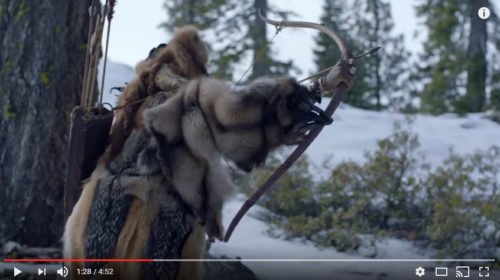 Meanwhile, one Migo takes the sensible decision to begin hunting for food 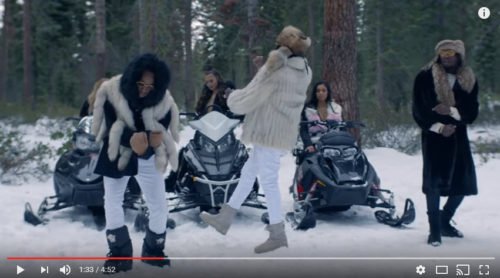 Guys it looks pretty cold out there, you might want to use those snowmobiles to get somewhere warmer 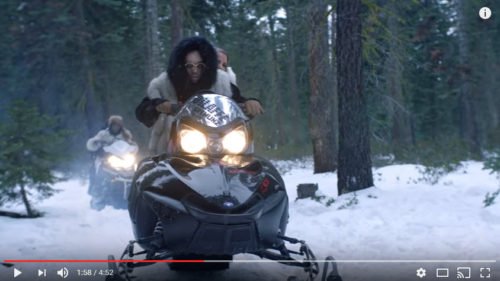 Takeoff leads the snowmobile expedition as they look for somewhere warmer to continue their raps. Perhaps a place that also serves hot chocolate with marshmallows. 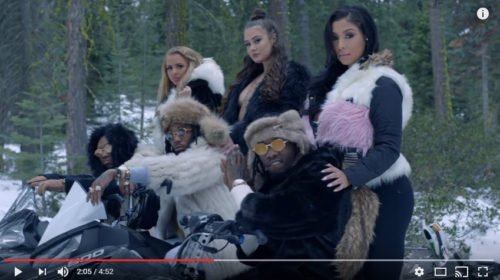 The gang make a quick pit stop to pose with their snowmobiles. The ladies are not enjoying this date to the snowy mountains in pursuit of cocaine. Couldn’t they have just bought it in Atlanta?

One of the most random things you’ll see in a rap video, Quavo dancing on the back of a stationary snowmobile while Black Coat Lady scowls. They’re never going to get anywhere on those snowmobiles if they keep stopping to fuck about like this. 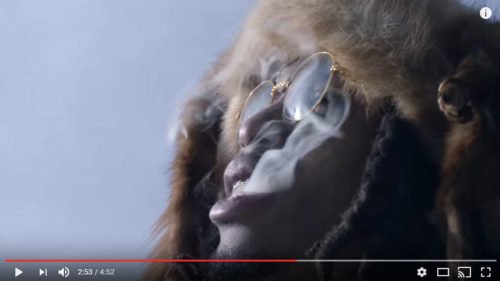 We’re nearly three minutes into a Migos music video and nobody has smoked any weed yet. Director Quavo quickly makes up for lost time. 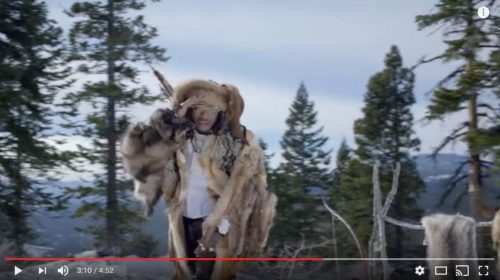 Lucky for Quavo there is always going to be a market for his dope so that’s good news, he puts his hands to the sky in thanks for all the drug addiction in the world. 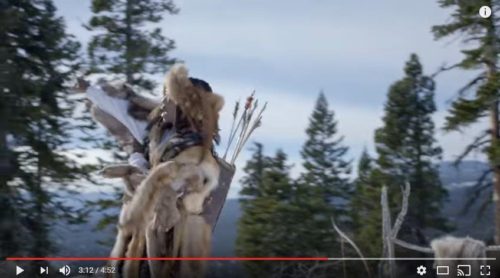 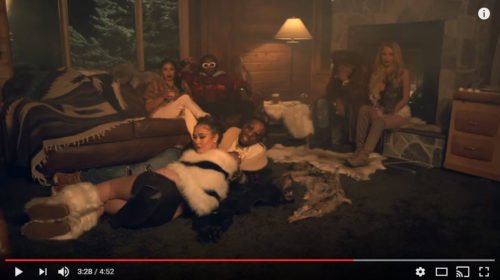 Everyone has made it back to the warmth of the ski lodge. The narrative has come to a satisfying conclusion. The drugs have been purchased, the audience has been reassured of its quality, all the main characters have a love interest and have all paired off accordingly. What could possibly left from this compelling narrative in the final minute and a half? 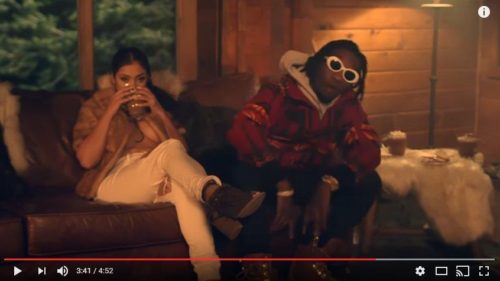 Offset gets to rap his verse while his lady enjoys a nice cup of hot chocolate [with marshmallows]. Who said rap videos were misogynistic? 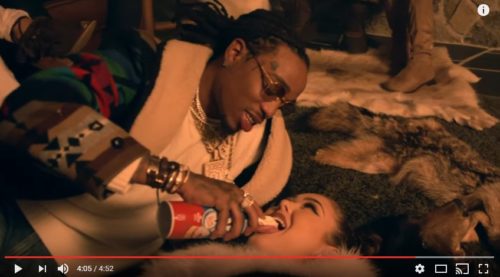 Meanwhile Director Quavo takes this opportunity to spray whipped cream into one of the lady’s mouths. Things appear to be getting a bit saucy in the cabin. I spoke too soon about the lack of misogyny.

And the rest of the video is more of the same, plenty of rapping in the snow and on the back of snowmobiles. Overall it’s a pretty creative video for a song about selling drugs. This is a pleasant change from the repetitive music videos we see in the hip-hop genre.