Die Hard. You love, I love it. In the 1988 Bruce Willis took on the iconic role of John McClane and successfully made the transition from television actor to Hollywood superstar.

Last week I decided to watch to watch the entire series of documentaries in a single sitting. But after 6 straight hours of Bruce Willis blowing shit up, I couldn’t bring myself to watch the fourth one. I remember it being a decent enough addition to the series, but I won’t be sharing my thoughts on it here.


If I was to hop into a time machine and myself to rank the Die Hard movies from the best to worse I would have said 2,3,1,4. This time to give this blog a semblance of journalistic integrity I have devised a scoring system where I will rate each film in 4 crucial criteria:

I considered rating Bruce’s performance, but it would be blasphemous to even consider giving him less than a 5/5 for each film.

I am going to assume that readers will be familiar with the films. Having said that Caution Spoilers!

Die Hard I aka Die Hard

Plot: Bruce comes to Los Angeles to attend his wife’s office Christmas party and it’s clear that their marriage is in trouble. Terrorists crash the party, take the guests hostage and begin an elaborate robbery. Eventually Bruce manages to kill the terrorists and in the finale he drops Alan Rickman off like the 30th floor, it’s pretty sweet. He also manages to sort things out with his wife too, a happy ending.

The Villain: Hans Gruber (Alan Rickman) is THE iconic Die Hard villain. When it comes to villainy he has it all, he’s ruthless, interesting and even has quirky henchmen, but most important of all Gruber is very charming and likeable. You sort of want him to get away with the robbery. He manages to straddle the line between everyday villainy and cartoonish super-villainy, keeping things believable. 5/5

The Sidekick: Bruce doesn’t really have a sidekick in this one, he chats to one of the cops [Carl] handling the negotiations on the ground floor but he’s not overly interesting. I mean Carl seems like a nice guy but he does nothing stand out. The other characters are also pretty standard and just do their job. 2/5

The Action: A little bit too tense for this guy. This is probably the most realistic of the series, Bruce uses stealth to pick off the bad guys one by one. In real-life I could imagine this probably could happen. But I like my shootouts to be a little more exciting, shit blowing up, car chases all that crazy stuff. 3/5

The Money Shot: About half-way through the film Bruce says his catchphrase in passing over the radio and it’s so-so at best. However, the phrase is used during the film’s final showdown. Hans has Mrs. McClane at gunpoint and another of his henchmen has his gun on McClane, Bruce is fucked. And in the final insult Hans sneers ‘Yippee-Kai-Yay, Motherfucker,’ Bruce snaps and shoots him, right in the face. There’s a pretty cool LEGO recreation on YouTube. Anyway the whole thing is totally badass 4.5/5 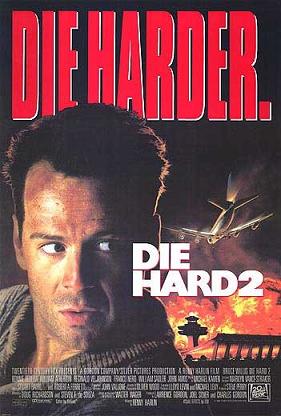 The Plot: Die Hard II feels like a true sequel, due to the high-level continuity with the first film. Quite a few of the supporting characters from number one make appearances, it also marks the last onscreen appearance of Bruce’s wife [Probably, I can’t remember if she’s in no.4.] Our man McClane seems to be in a good place, he’s been promoted to Lieutenant and it’s all good with the missus, plus it’s Christmas!

Anyway Bruce is at the airport and terrorists take it over, they then proceed to blow shit up and cause general havoc for the rest of the movie. They are interested in securing a South American dictator to be released from US custody, but Bruce saves the day and kills them all. Happy Days.

The Villain: Disappointing. The general is a bit boring, he doesn’t really do anything that evil or interesting. His men are functional at best. A couple of them are good at fighting, but their main purpose is to get shot or blown up. I am giving them an extra point because they blow up a plane full of people halfway through the film, not only is it downright dastardly, but the explosion is spectacular. Here’s a LEGO reconstruction of the carnage. 3/5

The Sidekick: He doesn’t have a true sidekick in this one, but he gets to talk to people more in this one. The head of airport security is a certified dick and Bruce spends most of the film clashing with him, hilarity ensues. The first film was let down by not having anyone for Bruce to talk, this one gives him people to make jokes to and allows him to clash with authority figures. Great stuff 4/5

The Action: Where do I start!? They blow up 2 planes; there are tons of shootouts and a chase on snowmobiles. Die Hard II excels in the action department; it is a big stupid action movie with plenty of shit blowing up and has the best action in the entire series. 5/5.

The Money Shot: So Bruce is fighting the bad guys on the wing of the plane (the runway must be pretty long because he is on that wing for a good five minutes.) But he is on the receiving end of a pretty thorough beat DOWN; he gets kicked off the wing and onto the runway. However during the fight Bruce was able to remove the fuel cap from the wing and it leaves a trail of fuel along the runway. As he is LYING on the tarmac Bruce notices the trail, he takes out his lighter and says “Yippee-Kai-Yay, Motherfucker,” lights the fuel, the flame goes along the trail, chases the plane and the whole thing explodes in breathtaking fashion, killing all the bad guys inside. 5/5

Die Hard III aka Die Hard With A Vengeance 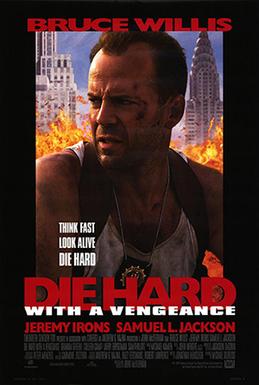 The Plot: Bruce begins the third film terminally hungover and it appears that his life is in the shitter, plus his wife has left him. Poor Bruce. There are more changes, firstly it’s summer. Secondly the film takes place in New York City so Bruce gets to drive around the city in this one.

So anyway the terrorists have placed bombs all over the city and Bruce is forced to drive around to different locations and diffuse the bombs by solving riddles. At the end, when all of the bad guys are dead Bruce calls his wife and it looks like he’s going to sort things out.

The Villain: Hans’ brother. He is played by Jeremy Irons, brilliant. Unfortunately he’s no Hans GRUBER; in comparison he is nowhere near as charming or evil as his brother. Although Jeremy is quite the diabolical fiend, which is always nice. His master plan is very clever, he distracts the NYPD with his bombs across the city so that the stretched police force are powerless to stop him stealing a shit-ton of gold bullion from Wall St. He told the police that he had placed bombs in a school, but by the film’s conclusion it is revealed that this was a bluff. while I admire his moral code I feel that Hans would always follow through with his nefarious schemes. 4/5

The Sidekick: Easily the best part of Die Hard III. Samuel L. Motherfucking Jackson is the sidekick, he spends most of the movie bickering with Bruce Willis and the results are hilarious. The chemistry between the two actors is pretty good, they spend most of the time shouting at each other, but you can tell that deep down they really do care about each other, interracial buddy cops at their finest. the other characters are alright, there’s a chief that seems to actually like McClane but the main enjoyment from the film is provided by SLJ. 5/5

The Action: Pretty good overall, because McClane is actually in a city this time he has plenty of opportunity to engage in car chases and the like. The car chases are good, and there’s a couple of shootouts. Pretty decent action in this one. I would have liked more gunplay, but I am happy with Bruce driving fast through traffic in the city.  3/5

The Money Shot: Quite disappointing, in this film Bruce shoots down the villain while he is in a helicopter, there isn’t a huge explosion or tense dialogue. A real let down from Die Hard III. 3/5

So the above scientific scoring system has shown without a doubt that the correct order for ranking the Die Hard movies is 2,3,1,4. Two has the best action, Three, the best sidekick and the best villain is in number one, so all the films excel in one of the areas. With such a combination of villainy, action and comedy the Die Hard trilogy is arguably the finest action trilogy ever made.