Baby Driver is a uniquely exhilarating ride with some of the most inventive action sequences of 2017. These days, Hollywood is awash with an interminable deluge of sequels and TV shows brought to the big screen – Baby Driver is a refreshing drop in this tedious ocean. This is the story of Baby, a young getaway driver, who gets called into for one last job with Kevin Spacey and his crew of roughnecks.

With the numerous uninspiring car chases in recent films, it’s easy to assume the trope has been exhausted. Yet for a movie based almost exclusively around the car chase Baby Driver is excellent.


With a combination of low-angle shots and inventive action, the chases take centre stage and unlike The Fate of the Furious, they remain grounded in reality.

When the action moves away from the cars, the intensity continues as we are treated to some brilliant shootouts filled with claustrophobic shots and close-ups to help the audience appreciate the emotional stakes of the scene.

Writer/Director Edgar Wright frequently shows his hand with amusing asides and charming touches. The plot builds towards a breakneck third act, packed with full-throttle action that stays true to the character development. The audience is invested yet energised by the action. 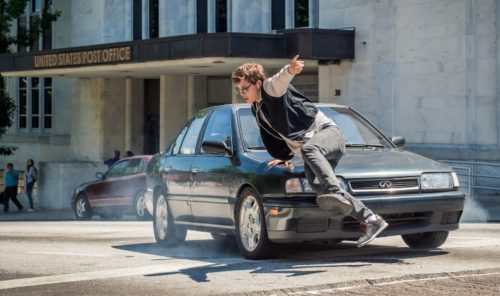 Furthermore, with heist movies of this nature there often seems to exist a ‘thief’s code’, where the crew of criminals are all somewhat likeable and work together for a noble goal. Think Ocean’s Eleven where all the criminals were slick, honourable characters.

Baby Driver’s crew are brought together through a shared interest in money and chaos. They aren’t here to become friends over the course of the film and work for a greater good.

Baby Driver’s thieves are bad and the main character is joined by Jamie Foxx’s ‘villain’; his funnest role since Motherfucker Jones from Horrible Bosses. He works well with his partner in ham. Jon Hamm, who clashes Foxx as the actors bounce off each other and have fun playing their exaggerated villains.

Relative newcomer Ansel Elgort plays Baby, an understated and quiet character that gives the film heart. His relationship with Lily James is the crux of the film and gives emotional investment to the plot. Elgort doesn’t have to do much in the way of acting, but his playful manner charms the audience into caring.

Music is an important part of the film and feels like a logical inclusion due to Baby’s mannerisms. Lesser films like Guardians of the Galaxy 2 namedrop the tracks just for the sake of it. Baby Driver’s music discussions feel relevant to the plot and provide an interesting device for moving the dialogue along.

Discussions about the tracks foreshadow key moments in the film like how Queen’s ‘Brighton Rock’ scores the dramatic final battle. Of course, Simon and Garfunkel’s titular ‘Baby Driver’ is well utilised towards the end of the film. It’s up there Master of None’s music video-lite for Soft Cell’s “Say Hello, Wave Goodbye”

Baby Driver is the best action movie of 2017 and has become one of the surprise hits of the summer. It is a film well worth watching in the cinema to fully experience the crashing soundtrack and eye-watering action sequences.