Gunpowder, the historical BBC drama series, has sparked controversy due to its realistic and graphic depictions of torture and executions during 17th century Britain. People shouldn’t be upset by this; the English government sanctioned these brutalities against Catholics and it’d be an insult to airbrush the gory details.

As a nation, we celebrate the torture and execution of Guy Fawkes and the Gunpowder plotters. Perhaps Gunpowder will make people consider the suffering Catholics endured during this period.

The Daily Mail never misses an opportunity to criticise the Beeb: 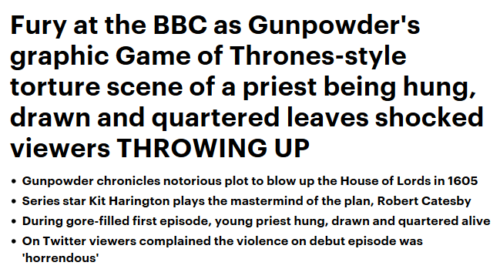 Would these papers stoop to adding a smattering of offended tweets to back up their point? Of course they would, here are a choice few:

I for one am shocked, SHOCKED! that Hanging drawing and quartering is gruesome! #Gunpowder

The BBC defended its show, saying:

“The methods depicted are grounded in historical fact and reflect what took place during the time of the gunpowder plot.”

Gunpowder stars Kit Harington, who is enjoying a triumphant 2017. First, he emerged as the main character in Game of Thrones; now Harington is carrying the BBC’s latest Saturday night drama. It airs an hour after Strictly Come Dancing, with the first episode drawing 4.8 million viewers. 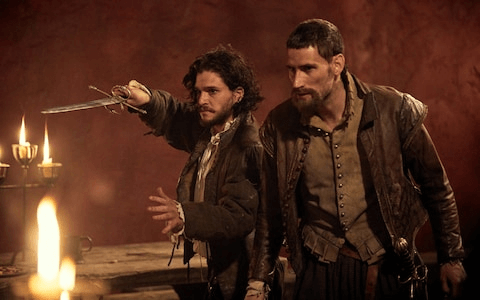 Harington plays Robert Catesby, mastermind of the Gunpowder Plot of 1605 which aimed to blow up the Houses of Lords, assassinating the Protestant King James I. At this time, Catholics were persecuted, facing execution and torture for refusal to convert to Protestantism. The plotters intended to reduce parliament to rubble and spur a Catholic uprising.

As we all know, the Gunpowder Plot was rumbled. The downfall came after a member of the group sent a letter to a Catholic politician, urging him to avoid Parliament on November 5th. The plan was revealed to the authorities who stormed the cellars beneath the building to find Guy Fawkes guarding an absurd amount of gunpowder. Fawkes was brutally tortured and eventually confessed, directly leading to his co-conspirators’ executions.

This is something kids learn about in school. We teach them about how the Gunpowder plotters were hanged, drawn and quartered, but seeing it on television is too much for some. We don’t hide the atrocities when the story is told in schools, therefore we shouldn’t avoid the ugly truth on television.

The show is well written, tackling the story of the Gunpowder Plot with sympathetic portrayals of the Catholics involved. The audience connects with the religious zeitgeist, and how some Catholics turned to political assassination in order to escape persecution.

As we’ve discussed, Gunpowder confronts the violence of the story. It would cheapen the show to avoid this critical aspect of the events. People offended by the violence of the show should probably avoid the rest of the series. Spoiler alert: most of the main characters are going to meet unfortunate and brutal deaths.

Anyone offended by the show should think twice before enjoying Bonfire Night, an event that gleefully celebrates the torture and execution of Catesby, Fawkes and the rest of the plotters. Perhaps the event has lost meaning and people aren’t as aware what they’re celebrating.

The purpose of Gunpowder is the illuminate a story most people only have a cursory understanding of – it’d be like if nobody got shot during Dunkirk. The violence of the era is critical to understanding the Gunpowder Plot, so it’s important to get the details right.