Skip to content
HOW I MET YOUR MOTHER: Season 9 Episode 24
The Last Drink
WRITTEN BY: Jack Kavanagh 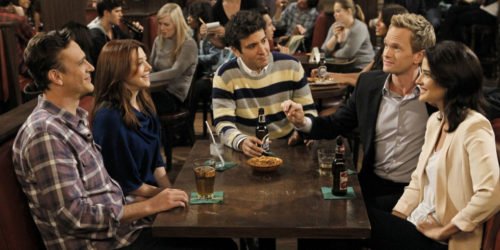 MARSHALL (Depressed)
I remember when I used to be a realistic and likeable character. I had storylines and everything!
TED
I’m just worried that she wouldn’t be the right person for me, I mean this is the woman I am going to be spending the rest of my life with.
The characters continue to discuss the life of TED. They then go off to the wedding, he marries THE MOTHER. Nobody mentions that she looks like a 12 year old. We have yet to learn anything about her character, so I will portray her in the manner which amused me most. I’ve also decided to call her Pam.
I will now fast forward to the wedding and avoid coming up with some sort of wedding-related hijinks. Let’s just assume that BARNEY staged some sort of overly elaborate and ridiculous stag night. We can be sure than the bickering about who will be the best man will take up a couple of episodes. Then TED and ROBIN have a sexually tense and emotionally naked conversation about love, she somehow manages to alleviate TED’s anxieties.
But in the end they all get to the church or whatever, maybe someone lost the rings or something, even if it’s a massive cliché.
INT.                                        WEDDING CHAPEL                        AFTERNOON
PRIEST (Probably played by a notable actor, hopefully CLINT EASTWOOD)
Dearly Beloved, we are here to celebrate the coming together of two souls under the sight of God Almighty
BARNEY winks at a ROBIN, brace yourselves for several jokes about their kinky sex in weird places after the ceremony.

I do
PAM
I do
*AUDIENCE APPLAUDS*
BARNEY (Quietly to MARSHALL)
I’d do her
*AUDIENCE LAUGHS*
Cut to the after party. TED is quietly talking to PAM on the head table. LILY and MARHSALL are involved in some baby-related shenanigans, much to the delight of the studio audience.
MARSHALL (angrily)
Why am I here!? I don’t need to be on television, I’ve made movies with Justin Timberlake! Do you hear me woman!? Justin Fucking Timberlake!
(Suddenly the baby vomits on to his shirt)
LILY
Now you know how Britney Spears felt
*AUDIENCE LAUGHS AND WOOPS*
The wedding ends and everyone moves on with their lives.
We fast forward, 5 years into the future and see the gang. BARNEY and ROBIN have 3 children, TED and PAM have a young baby. However, MARSHALL and LILY’s child has turned into an annoying little brat, beloved by the studio audience. He also has a catchphrase, which is regularly shoehorned into every scene.
LILY
OK Marvin, let’s get ready for your first day at school.
MARVIN
No!
LILY
Don’t worry about it. School will be great, you can make new friends and you’ll grow to cherish the experience in your later life
MARVIN (Sadly)
Bojangles
*AUDIENCE LAUGHS AND APPLAUDS*
MARSHALL
I should have taken that role on Parks and Recreation when I had the chance
The timeline advances further and further into the future and we learn what life holds in store for each member of the gang. Until we get to the final scene.

FUTURE TED (Stepping from behind the camera, while speaking to his children)
And that kids is the story of how I met your mother. Every up and down in my late 20s, all the women I hooked up with that weren’t your mother, every unsavoury detail about your Uncle BARNEY. Anyway I hope I wasn’t talking for too long. (Glances at watch) What time do you reckon dinner will be?
Suddenly YOUNG TED bursts into the living room. He looks disheveled and is holding a gun. He points the gun at his future counterpart
OLDER TED
Woah! Who the fuck are you!?
YOUNG TED
I’m you! From the past
*DRAMATIC CHORD*
I’ve gone forward into the future……to kill you
(Shocked expression from the characters)
OLDER TED
But! If die, then you die!
YOUNG TED appears unconcerned and shows the audience that he means business with a menacing laugh. But he was not expecting OLDER TED’s surprise attack. The two men wrestle for the gun, but it slips out for their grip and skids across the floor and lands at the feet of THE DAUGHTER. She picks up the gun and points it at the two men.
OLDER TED
DAUGHTER! Don’t shoot me! Shoot him, I’m the real TED!
YOUNGER TED
No! Shoot him
THE DAUGHTER looks unsure. She considers a moment, then hones her pistol on one of the TEDs. She closes her eyes. The camera zooms in on her face. A gunshot is heard. A body drops.
YOUNG TED looks himself over and realises that he is unharmed. THE DAUGHTER drops the gun and runs over to YOUNG TED, they hold each other for moment. Finally he begins walking away dramatically.
THE DAUGHTER
Where will you go??
YOUNGER TED
Wherever I am needed
END
*AUDIENCE WILDLY* APPLAUDS
Now I am pretty sure that the above will never be even remotely considered for the last ever episode of How I Met Your Mother. There are numerous plot holes, unrealistic situations and the ending was extremely unsatisfying. You might think that I just came up with the above story in the space of an evening. And you would be right. But instead I have given an extended metaphor for the lifespan of one of my all-time favourite sitcoms.
It started out nicely, good characters, snappy dialogue. But something went wrong, in around season 4 and the quality began to steadily decline with each coming season. Instead now the show it just a series of random plots occurring in increasingly absurd scenarios.

I sincerely hope that the writers get their act together and give us a good final season, so we can say goodbye to the characters and allow them to join Scrubs and 30 Rock as strong candidates for ‘Best Sitcom of the 2000s’