Rapping is hard. It’s about more than rhyming words together; there are important considerations such as flow and the way you say things. 21 Savage isn’t a great technical rapper, but makes good music thanks to his captivating personality and the grim, atmospheric beats he rhymes over.

Today we are going to talk about a rap song by 21 Savage that is very bad. It’s called “7 Minute Freestyle”, it goes on for a very long time and I’d like to tell you how terrible it is.


21 Savage is an Atlanta trap rapper, who has recently released his debut album Issa Album in July 2017. Firmly embedded within the Atlanta trap scene, Savage frequently collaborates with producers responsible for creating the sound which is so dominant in rap right now. 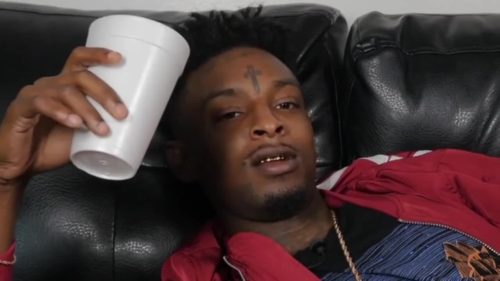 21 Savage came to people’s attention last year with his inclusion in the XXL Freshman Class of 2016 alongside Anderson .Paak, Desiigner, Lil Yachty and Kodak Black. This exposure led to an EP Savage Mode a month later. Entirely produced by Metro Boomin the project went Gold in America, backed by successful singles “X” featuring Future and “No Heart”.

Issa Album peaked at #2 in the Billboard 200. Fellow Freshman Class mate Lil Yachty appeared to have more buzz this year, but his debut album Teenage Emotions only managed to reach #5 in the charts before plummeting in subsequent weeks.

All the more impressive, as Yachty is a lot more pop-y than 21 Savage’s dark tales of the streets. Both artists came to the masses attention at the same time, but Yachty has been a lot more visible, due to appearances on two hits songs “Broccoli” and “iSpy” with Kyle, one of my favourite music videos of the year. Not many expected 21 Savage to outsell Lil Boat. 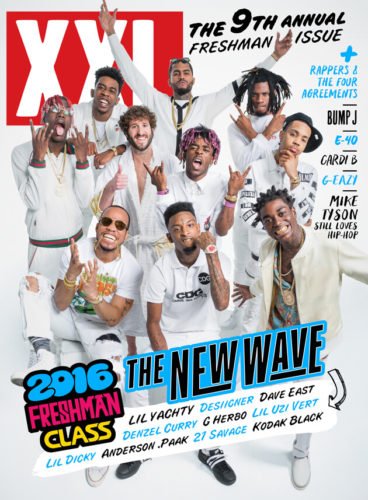 A rapper like 21 should know that he has no damn business even attempting to freestyle like this. His poor rhyming skills have been exposed. He thrives on atmosphere and mood, not lyrics and this is made painfully clear over the 7:21 minutes of “7 Minute Freestyle”.

Savage doesn’t have a great deal to say, mainly rambling about how rich and dangerous he is. For the last section of the song Savage adds 21 to the end of every line, giving the illusion of rhyming.

This lasts for four painful minutes. 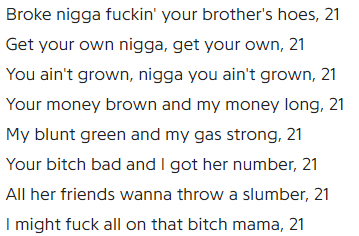 No one listens to 21 Savage because of how good his bars are, but this feels especially lazy. Hell, Little Brother’s “Whatever You Say” has a great verse where Phonte spits without rhyming once but his flow is so good the rhythm of the language makes for a great rap. Showing that you can make great rap songs without rhyming.

21 Savage is interesting enough to carry an hour-long album with no features. Sometimes he makes jokes, which is weird because of how moody he usually is.

21 projects a bleak vibe and addresses how his negative surroundings affected his mental health. He’s probably one of the best rappers talking about depression since Scarface started doing in the early 1990s.

He also pronounces ‘street’ as ‘skreet’, which makes me chuckle.

It's pretty amazing waking up every morning feeling love like this. I've cried endlessly and been hurt a lot in my life, I've been abused, talked to like I wasn't shit, been gaslighted and Slut shamed by men that I once loved and cared about. So I'm so thankful that God brought this amazing person in my life who genuinely has my back and is ready to "pull up" to defend my honor by any means. Maybe he's just as broken as me and that's why we're perfect for each other but either way he's not going anywhere and neither am I.

Regardless, 7 minutes is a long time to be rapping on your own. Just you, no help. Coupled with the fact Savage has run out of things to say by this point of the album, it’s a directionless tale of getting laid, getting high and getting money.

Here are some better rap songs that are over 7 minutes long and are good; you’ll notice that most don’t involve one person rapping about inane things for the whole time.

Ok, this song is far too long, but everything up until Big Bank Hank talks about his “super sperm” is just great. The first commercially viable rap song , an iconic track.

It ends with an 8-minute monologue where Kanye describes his life and his journey through the music industry to his debut album College Dropout. A captivating story.

Widely considered the masterpiece from Kanye West’s magnus opus, My Beautiful Dark Twisted Fantasy. A progressive rap song, the production is incredible and concludes with a haunting vocoder solo.

There was even a Runaway film about West falling in love with a naked bird lady, peak Kanye opulence.

Why You Hate the Game – The Game

Over one of just Blaze’s best ever beats, Game and Nas exchange verses about their stories. Just Blaze then takes over the song for an extended outro, leading a choir for the refrain. It’s pure Gospel.

The common thread is that these songs do more than just having rapped verses over a beat; there’s progression and inventive ideas. We don’t just have Kanye West mumbling about his life. 21

“7 Minute Freestyle” is the worst song of 2017 and I would strongly advise against wasting part of your life listening to it. 21

The song will test your patience and will bring you to brink of quitting rap music. 21