Another music video breakdown, this week we are looking at the adorable video for “iSpy” with Kyle featuring Lil Yachty. At Culture Hash we love a bit of Lil Boat and his bizarrely infectious style of rapping and singing.

He’s causing a bit of a stir in the hip-hop world, with his seeming lack of respect for the founding fathers of hip-hop. People got upset when he said he couldn’t name five songs by Tupac or the Notorious B.I.G, but at the end of the day he wasn’t even born when both of the rappers died.

Lil Yachty is looking like the future of hip-hop at this moment; his lack of respect for the older people in the genre seem to represent a shift in the genre. He has thus far released two good mixtapes. Times are changing in hip-hop some people might not like it.


Meanwhile, Kyle is a less known Los Angeles rapper/singer but then again, which rappers don’t sing these days? “iSpy” is Kyle’s biggest song to date and has brought a lot more attention to the West Coast-native.

Kyle is pretty decent, he has released two, mostly self-produced albums to date; he takes heavy inspiration from Drake and Chance the Rapper. Make of that what you will.

Here are the Google searches for Kyle over time, they show a man with his stock on the rise:

“iSpy” is a great song that explains the tightrope act that is chatting up girls on Instagram when you don’t have many followers of your own. The message of the song assures us that you have to choose the lasses who don’t have too many likes because they’re out of your league. So you need to choose your targets wisely.

Kyle: He has a gold tooth and a poor stage name, that’s never going to do well in search engine results. True story, the band Chvrches spell their name with a “v” because they didn’t want to compete with actual churches in Google searches.

Lil Yachty: Aka Lil Boat, he can be recognised by his bright red hair. He looks like a baby in this video.

Yachty supposedly doesn’t take drugs or drink, which is strange because you don’t hear of many black people with bright red braids who name themselves after nautical vehicles who don’t take drugs.

[For reference 03:02 means that the scene occurs at 3 minutes and 2 seconds occurs into the video.]

Before the track gets started we are treated to a little conversation between Kyle and Lil Yachty. It’s heart-warming stuff as Lil Yachty tells Kyle not to worry about the haters and be himself. 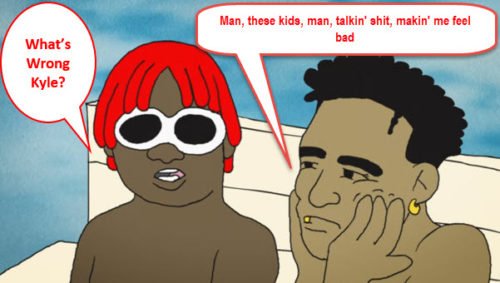 Kyle’s sad, luckily his good friend is here to make him feel better about the world. 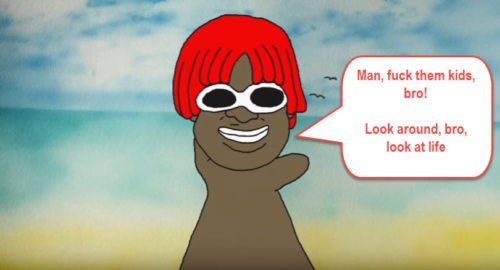 And he’s right, this beach is filled with “fine bitches”, water and trees 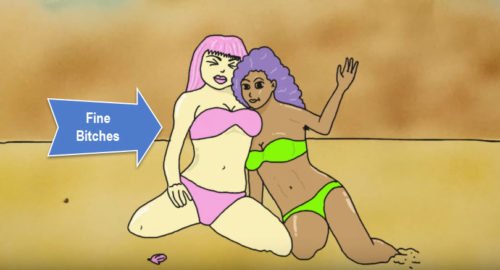 Kyle is reassured that life is good, and now he’s ready to rap. 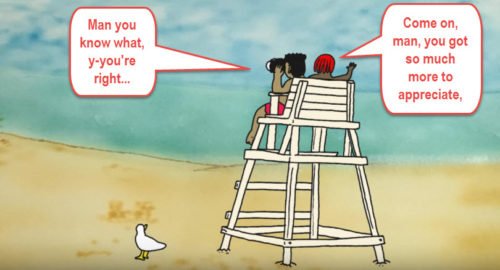 I love this intro, it’s inspiring and hilarious in equal doses. From two people with great chemistry who don’t take themselves too seriously. 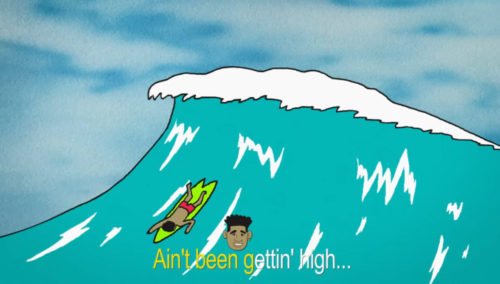 It’s time to get into the song for real with Kyle starting off on a surfboard, loving life. The video has the feel of a classic Hanna-Barbera cartoon, complete with little bouncing heads over the lyrics. 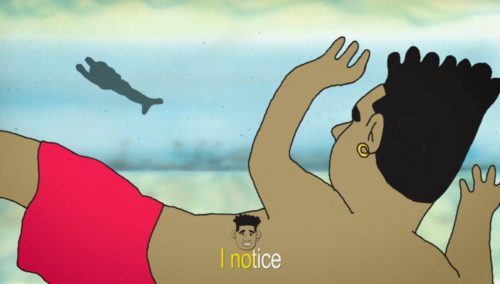 Kyle falls of his surfboard and drifts into the murky depths, but luckily there’s a little boat nearby that might be able to rescue him from a certain death.

Kyle gets up to various adventures while he’s underwater, including smoking some doobies with the fishes. Like a more adult version of the Little Mermaid. 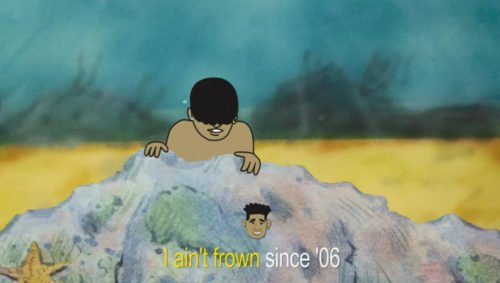 Shortly after Kyle boasts about having a selfie with Oprah he tells us that he hasn’t frowned for over ten years. He also hasn’t cried since 2001; these are all ludicrous in their own right, but paint the picture of a happy man. Of all those facts I find the Oprah selfie least believable.

On the Oprah selfie, Kyle is clearly insecure about people believing him and gets a bit defensive about it when he explains the lyrics on Rap Genius:

I got a selfie with Oprah, I just ain’t never post it
― Kyle (Ft. Lil Yachty) – iSpy 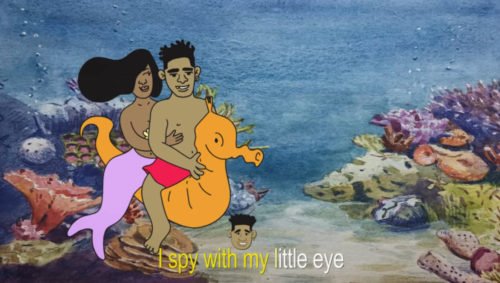 Kyle manages to find some underwater love and takes his new companion on a sea horse tour of the oceanfloor.

We’ve reached the chorus; I’ll leave it to Kyle to explain his patented technique for finding Instagram love by praying on the young ladies without many likes:

Surprisingly this isn’t the only song Kyle has made about chatting up girls who haven’t got many Instagram likes. “@FoundBae” is a shoutout to his favourite Twitter account:

“You can go to @FoundBae and really find the dimes. They do the research to find who the dimes are that are only rocking with like 500 followers.”

Kyle’s backcatalogue isn’t the best, but if you are looking for digital love you can get some good tips from him. He should have more confidence in himself! He managed to find love at the bottom of the ocean without the assistance of Instagram. 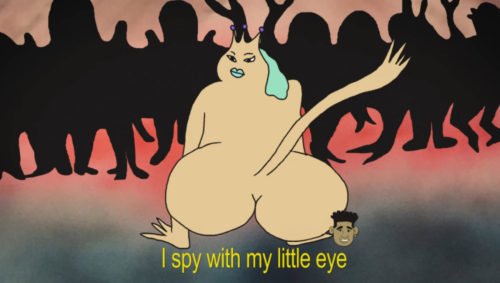 The happy couple head to the local nightclub and meet some saucy sea monkeys. It wouldn’t be a rap video without some booty shaking.

But, shit Kyle is still lost at sea.

Cometh the hour, cometh the Boat!

When Kyle described the making of “iSpy” he spoke very highly of Yachty:

“[He] did his verse in 10 minutes, hella quick, on some real genius shit. He was on some Jay Z shit, it was crazy.”

Not only did he call damn Lil Boat a genius, he made a serious comparison Jay-Z… The second thing Yachty says on this song is:

“All my bitches come in pairs like balls in my nutsack”

I’ll let you draw your own conclusions.

My favourite line on the song and probably my favourite Scooby Doo reference in a rap song. 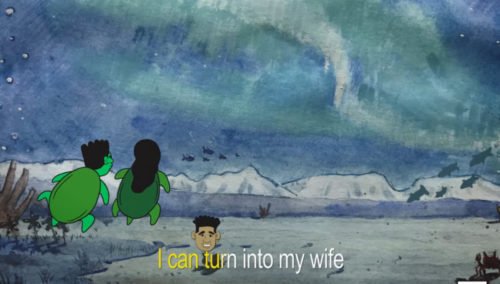 Things get a bit cosy as Kyle and his lady friend turn into a variety of sea creatures as they float around the ocean during the final chorus. I like it best when they’re little turtles swimming together. The animal animations are cute. 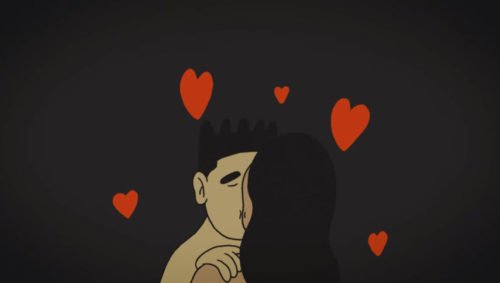 Just then they turn back into people and kiss. I feel a sudden twist ending coming… 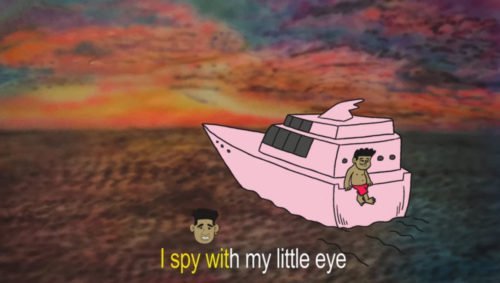 Yep! Everything was a dream. The classic ‘it was all a dream’ ending, one of the biggest cop outs ever.

However, for a rap video this was a pretty unique experience. The song was beautifully animated and brought back warm childhood memories of The Jetsons and other classic Hanna-Barbera cartoons. It gives a positive song such as this a warm quality that matches the tone.

One of those rare videos that improves the song and adds to the experience. Plus, who doesn’t miss those bobbing heads over the lyrics?