There have been several infamous days in recent West Ham fan history, 2009’s Battle of Upton Park where a Millwall fan was stabbed.

Or the last game at Upton Park where the Manchester United bus was pelted by missiles on its way to the ground. 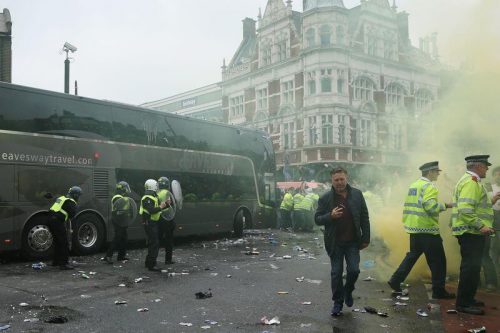 We now have another unfortunate chapter in the Hammers story, as once again, the fans have made themselves look to be a group of disorderly thugs. 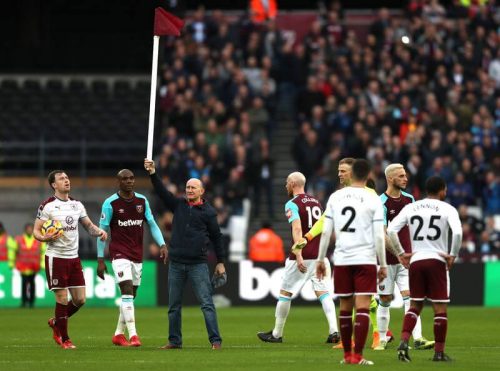 Yesterday’s 3-0 home defeat to Burnley started well enough. There was a good first half atmosphere as West Ham United drove forward and asked serious questions of Burnley. As soon as the Clarets surged ahead with a well-taken goal, things immediately changed. The likelihood of a Hammers win evaporated as long-building dissatisfaction was released.

The stewards lost control of the crowd and we saw several disruptions, with fans on the pitch accosting the players. We knew it was going to be nasty in the lead-up to the game, a fan protest was organised, cancelled and chaotically reorganised. Make no mistake there are legitimate, justifiable reasons for the anger; but the ugly scenes at Burnley strips all context from events.

Our club is a joke. No wonder stewards can’t do anything at all. Ours in 103 was sleeping! #WHUFC #westhamway #irons ⚒ pic.twitter.com/NabtyU99KW

You can’t argue ‘the ends justify the means’. We all love football but when scared children have to be sheltered on the Burnley bench there is a serious problem. We all take the game too seriously, but the disorder was unacceptable. Blackburn Rovers have been protesting their ownership for years; nothing has happened aside from seeing the 1995 Premier League champions slumming in League One.

I’m a hypocrite. Last season I invaded the pitch at the Leyton Orient fan protest, but that felt different. The Os were heading out of the Football League after the particularly awful ownership of Francesco Becchetti, who oversaw consecutive relegations and financial meltdown.

The fans were sold a dream when they left Upton Park, that much is true. We have gone backwards as a club since moving to the vacuous Olympic Stadium, enduring yet another relegation-tinged season. But is anyone talking about these issues? No, instead we have to see images of idiots on the pitch as the club gets smeared by the media.

Frank Lampard “I understand the fans feelings in general. They feel like they’ve lost an identity in moving stadium. Part of that deal in moving was to fight for Europe and invest – The club has a £29m net spend, it’s not enough – they’ve gone backwards.” pic.twitter.com/tEdWKw8GRu

How can anyone justify violence towards the chairman of a football club. Don’t get me wrong Gold and Sullivan are complete morons, but where was this when Theresa May made yet another NHS cut? Where was this reaction when something important that affects millions of lives happens? People have died as a result of the Conservative government’s horrendous mismanagement of our health service, West Ham are mediocre a football team in East London. Acts like we saw on Saturday can never be justified in modern day Britain.

Let’s quote club legend Trevor Brooking, who grimly watched the scenes unfold below his seat in the director’s box:

“Before yesterday they had six home games out of nine, which to a certain extent looked an advantage,

”When you’ve just lost 3-0, had people coming on to the pitch and a lot of people venting their frustration to the directors – that means the next five games at home look pretty bleak.

”There is no way the team is going to play and get the points to stay up under that sort of atmosphere. It is impossible.

”That atmosphere must never come back in the last five games otherwise the club is in serious trouble and the players won’t be able to deliver.”

Let’s hope we can move on because such a toxic environment helps no one. West Ham need improved stewarding, better communication between fans and stakeholders; and better results on the pitch. At present, only the first option appears likely.