Continuing our series of interview with up and coming creatives, we’ve caught up with my good friend Max Dean to discuss his recent experience directing and writing the play Sommber for the Jump Start Showcase in Worcestershire.

Living in Conservative Britain has proved challenging for people who are passionate about the Arts and as we will learn, Theresa May and company could be doing far more to encourage non-affluent young people to get involved.

But aside from taking [easy] swipes at the government, we are here to discuss the experience of a first-time director and what shaped the experience:

What inspired your play Somm-ber?

My friend Tom (who’s a proper playwright) sent me the complete works of Sarah Kane as a wedding present. Which considering the content of her plays is a pretty dark wedding presents actually. He knows me well though because I was completely absorbed by them and read them over the course of a Saturday and night, that’s not as impressive as it may sound as she only wrote 5 plays before committing suicide.

Her writing is very beautiful though, she does an incredible job of instantiating something very deeply human about our capacity for fragility and violence. I’ve never read anything like her before or since. Her final play 4.48 Psychosis is considered by many to be almost a suicide note, it was only ever performed posthumously and consists of disembodied voices discussing the futility of life and the intrinsic suffering of existence. So not the cheeriest of Saturdays!

I was captivated by what she’d expressed in her plays and felt compelled to write a play in response to her pessimistic nihilistic view with my own optimistic nihilistic one. I’d only attempted writing a play once before at university and that never saw the artificial light of day. I just sat a wrote it over the course of the Sunday.

I guess the simple answer to your question is Sarah Kane’s depression. 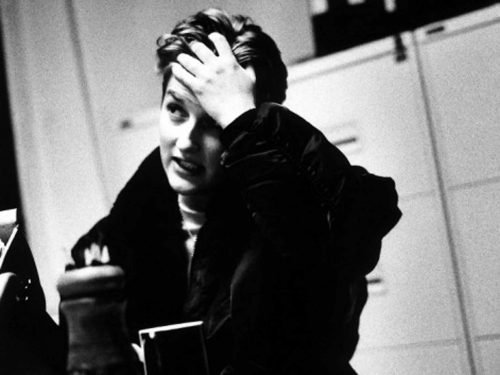 What was it like writing and directing the play, then seeing the actors bringing your words to life?

Much more fun than I had anticipated! I got very lucky with my actors who were both superb and really understood what I was clumsily trying to achieve with my text. It’s a very different experience to performing in a play or just writing in abstract.

Not everyone knows the difference between a theatre director and a film director, what’s the main distinction?

There are far more educated people with much more eloquent distinctions but I was to have a stab at it I’d say: One of the main differences is the consideration of the live event a theatre director has to consider as opposed to the shot by shot perfectionism a film director can achieve.

A theatre director has to cultivate an overall feel of a performance and atmosphere for the actors to reproduce multiple times whereas a film director just has to get it how they want it once and capture it on film. They can spend a week getting ten seconds perfect because once it’s done they can bank it and move on.

Theatre is always in a state of becoming, the same show will change every time you see it in some way or another. Some theatre directors actively encourage this in their actors, others strive for a ‘perfect’ vision of what they want and are very strict with their actors as to what they do onstage.

The honest answer is I don’t think there is a clear one. There are as many different types of directors as there are painters or musicians. Most of the directors I know have dabbled in both mediums but have a preference for one over another based on what they want to communicate through their art form.

How could the government do more to promote the arts?

There are so many answers to this question. The arts are having a tough time of it at the moment like so many other areas. The arts in general and are only ever increasingly becoming the domain of the privileged.

This is a death knell for art in my opinion. As with anything I believe it starts with exposure and education. Many Arts subjects being dropped from the national curriculum doesn’t help, if you look at private schools they will have their own theatres, music studios, etc.

It’s a pointless conversation to have at the moment though, arts disciplines won’t win a Neo-Liberal argument about value anytime soon. Creativity, innovation and discipline mastery are thrown around as catchphrases that are seemingly important to education but actions and rhetoric are often at odds. This discussion will quickly devolve into a political rant with me.

Have you had ideas for a future work?

I’m considering submitting Somm-ber to a Birmingham based scratch night but other than that I’ll stick to just writing as a hobby if the mood takes me. That’s the only position I can give advice from, as a complete novice, if I can have a go at it then anyone can.