David Haye [28-3, 26 KO] has lost his much-anticipated heavyweight boxing contest with underdog Tony Bellew [29-2-1, 19 KO]. It was embarrassing for Haye. Going into the fight people still regarded him as a top heavyweight, but the fight showed that the Hayemaker is long past his prime. It’s time for him to go back into retirement. Then Haye can live out his years talking to Carl Froch on Sky Sports Boxing about that time he fought George Groves in front of 80,00 people at Wembley.

Haye v Bellew was a dramatic grudge match that was heavily hyped in the build-up due to the acrimony displayed by both fighters. Punches were thrown at press conferences and insults flew between the fighters, sometimes these were directed at the audience. It was high drama and surprisingly the fight was as entertaining as it was teased to become.

Haye promised to send Bellew to hospital, which felt unseemly. Last year Mike Towell died after a fight in Glasgow and Nick Blackwell was placed in a drug-induced coma for a week due to brain injuries sustained during a bout with Chris Eubank Jr., promising to send people to hospital after a fight was unnecessary.

Tony Bellew was regarded as a major underdog going into the fight, he was 4/1 at some bookies. I didn’t agree with this for four reasons, in order of importance:

Knowing these facts allowed me to place one of my trademark pauper bets and win £10 on the outcome of the fight.

This was the first actual step of Haye’s comeback and he looked like a man who should have stayed retired. He weighed in at a stone heavier than Bellew, older boxers find it more difficult to control their weight.

This extra mass made Haye look bloated and slow in the ring, very much like a 36-year-old

Haye started the fight brightly and was ahead on most people’s scorecards going into the sixth round, where he suffered an Achilles injury. Something that was reportedly causing him discomfort leading into the fight

From here it was all Bellew, as he controlled the fight and wore down his opponent, who was stumbling around the ring and avoiding trouble. Bellew knocked Haye down in the eleventh round and the bigger man spilled out of the ring in dramatic fashion before getting up to beat the count. However, Haye’s team threw in the towel to end the bout before the fighter could do any more damage to himself. Bellew wanted him to stop and told the media:

Despite the months of smack talk, both fighters showed great sportsmanship at the end of the fight, which is always encouraging to see. Bellew suggested a rematch, which Haye seemed excited for, but that would be a terrible idea for the Liverpudlian. It would generate a lot of money, but Bellew would gain little from beating David Haye again.

He should look to fighting for a world title perhaps in the heavyweight division as this victory will have generated a lot of buzz for his name. Eddie Hearn suggested this route, but it would depend whether Bellew wants another guaranteed big pay day.

Meanwhile David Haye is done. He should go back into retirement because yesterday’s fight showed that his skills are nowhere near where they need to be. There’s no way Haye can get a fight against a world champion with his next fight. He needs at least two more fights before he can face the likes of an Anthony Joshua. Let’s say it takes Haye 2 more fights to get a world title shot, that is minimum 2 years away. Who would want to fight 38-year-old David Haye at this point? What would beating him prove? His career is done as far as being a top contender in British boxing. 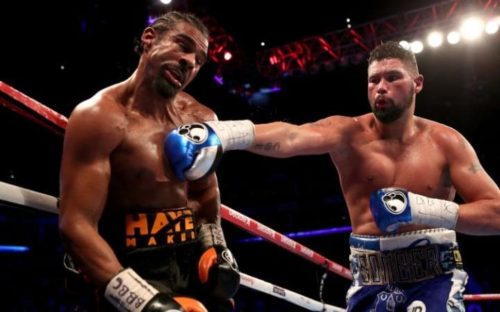 It is a sad way for Haye’s relevance to end, coming out of retirement is rarely a good idea in boxing. Look at Roy Jones Junior, he’s still plugging away at age 48 but suffering many brutal knockouts in the process. I want to see Haye go away after this defeat before he does any further damage to his legacy.