Skip to content
I have always been something of a Justin Bieber apologist. He never drew strong emotions from me, Before I heard his new album, the strongest emotion he drew in me was disinterest. Perhaps I’m biased, I only scored 54% on the “How Much Do You Hate Justin Bieber” quiz.


I don’t belieb I listened to much of his music, it’s made for teenage girls and because I’m not his target audience I chose not to listen to it. What I heard I didn’t like, it didn’t cause me to overreact like certain people.

In 2010 4Chan created a poll to have him deported to North Korea, which attracted half a million signatures. They also tried to force “Justin Bieber syphilis” to the top of Google’s suggested search terms. Internet japery at its finest.

He’s done some stupid things over the years, like the time he went to Anne Frank’s house and signed the guestbook – “Truly inspiring to be able to come here. Anne was a great girl. Hopefully she would have been a Belieber.” Which is an objectively hilarious thing for anybody to write.  It’s certainly not the worst thing a musician has ever done.

The only reason I can see for such passionate hatred is jealousy. Biebs achieved more success at 16 that some people do in their entire lives. He did it with a string of terrible hits, that clogged up the radio for months at a time. The dislike is justified to a degree, and for a long time it was cool to hate Justin Bieber. But, the winds of change are blowing and Bieber fever is spreading.

8th January 2016 was the day everything changed. Justin Bieber became the first person to simultaneously occupy number one, two and three spots in the UK Singles Chart

We’ve seen similar feats of chart dominance from Biebs before, this time it was different. Because his latest album Purpose, and the singles its spawned are legitimately good pop music. Right now, the people of Great Britain are listening to unprecedented levels of Justin Bieber.

“What Do You Mean?” started things off, when it was released the lead single for Purpose in August 2015. A tropical house track with a chilled, danceable beat, co-produced by Bieber himself. It has a very catchy chorus – “What do you mean? / When you nod your head yes, but you wanna say no?” It’s a song about how Justin Bieber doesn’t understand women. I relate to this song because I don’t fucking understand women either.

“Sorry”, the second single came out two months later and is the best song Bieber has ever made. Skrillex produced a dancehall-inspired deep house beat that nicely complements the falsetto vocals.

Quick aside, Nas raps on this album, on a fucking bonus track.The greatest rapper of all time, relegated to bonus track duties. 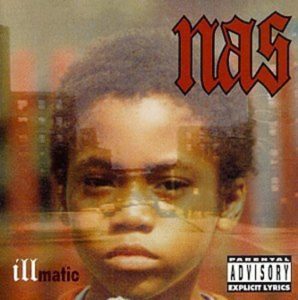 The two singles are high-points from a strong album that is a radical departure from Bieber’s old music. Overall, the album’s quality is somewhat spotty, especially towards the latter tracks but the high points more than compensate for it. I’d rate it album 7 Questionable Tattoo Sleeves out of 10.

We must question. Who is responsible for the quality of this album? Has Bodybag Biebs matured into a credible songwriter or did he have help? The answer lies between the two. Bieber has a writing credit on each of Purpose’s tracks alongside a variety of co-writers, the likes of Travi$ Scott and Ed Sheeran, plus veterans Rodney Jerkins and Mike Dean.

This isn’t unusual for pop albums in 2016. Consider, the writing credits for Purpose: 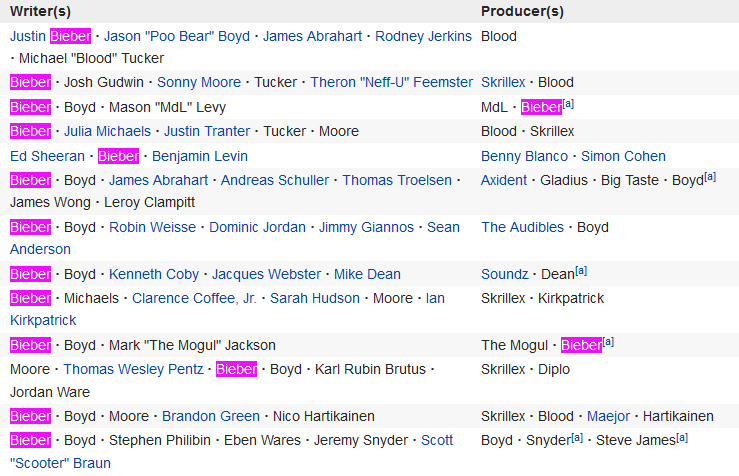 Versus the credits for Beyoncé’s Lemonade: 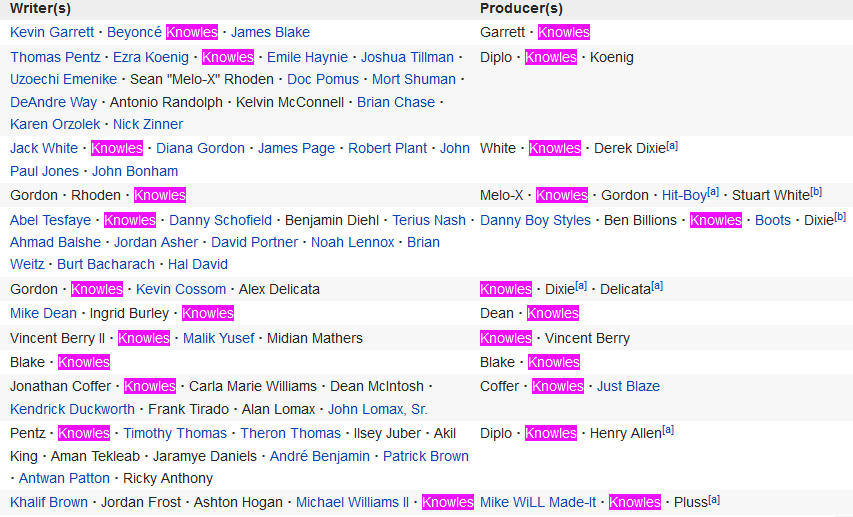 Excluding Bieber there are 52 songwriting credits on the album. Lemonade has 67 credits. You can’t say Beyoncé is a musical genius who gave us one of the most personal albums ever; and then criticise Biebs for having an army of hit-makers to create manufactured pop. He deserves as much credit as Beyoncé receives for Lemonade.

Undoubtedly, the success of Purpose lies in the quality of the beats. Skrillex produced 5 of the 13 songs on the standard release. Including “Sorry”, “I’ll Show You” and “Where Are Ü Now”, all three have gone at least platinum in the UK.

Let’s be realistic, Justin Bieber could write the great fucking songs about getting his heart stamped on by Selena Gomez; and people like me wouldn’t care. Skrillex’s excellent production has done a lot to establish Biebs as a credible musician. 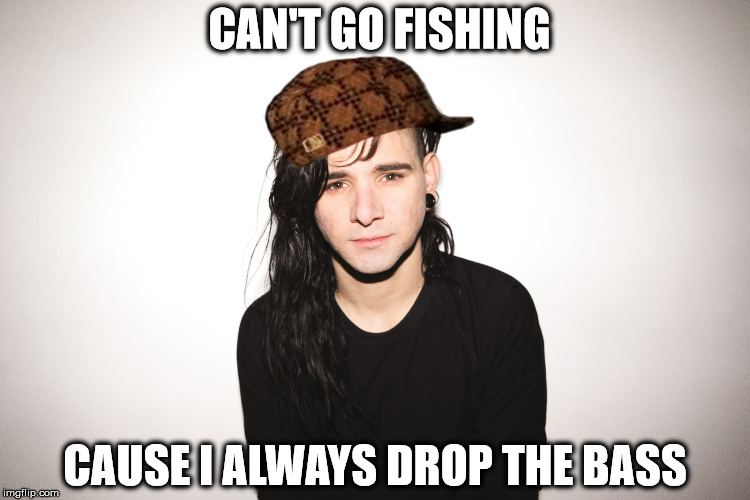 Justin’s career trajectory fascinates me. He’s grown up in the public eye. When we first met him he was an emerging teen heartthrob/idiot. We’ve seen him grow up and start hanging out with the rap guys. It was inevitable that he would start smoking weed and getting tattoos. There is a strong hip-hop/R&B influence in his music as a result.

This transformation is oddly reminiscent of Justin Timberlake. He started life in a 1990s boyband and churned out manufactured pop with the best of them. At the time, adults over a certain age reacted negatively to the band and their shitty music. I’ll leave it to Eminem to describe how many people felt about N’Sync in 2000:

It’s easy for people born in the 1990s to forget this, we grew up with N‘Sync’s music which gives it a nostalgic quality. But let’s not deceive ourselves, it is objectively terrible music which has gotten slightly less shit with time. Here‘s the chorus for N‘Sync’s most memorable hit, “Bye Bye Bye”: 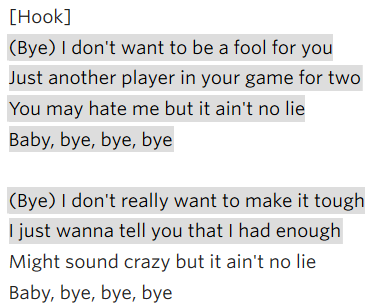 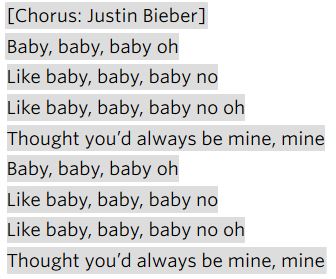 What’s different? Both have tedious choruses with endless repetition. Can we really say that our teenage garbage was better than the trash teenagers are listening to in 2016?

We “90s kids” judge the music teenagers listen to now, because we had real music when we grew up. It’s important to remember that all music marketed teenagers is terrible. The only reason we like N Sync now is because we were the target audience for that awful music.

Justin Timberlake went solo from N Sync at 21 and started fraternising with people in the rap scene. His debut album, Justified was 90% produced by Timbaland and The Neptunes.

This album was hugely successful and generated some of the best R&B of the 2000s. I wouldn’t be surprised if Bieber looked to emulate the Timberlake formula.

We all know the story ended, Justin Timberlake reinvented himself; and after years of hard work, he was named the #3 sexiest artist by VH1. Narrowly losing out to Phil Collins and Fat Joe. 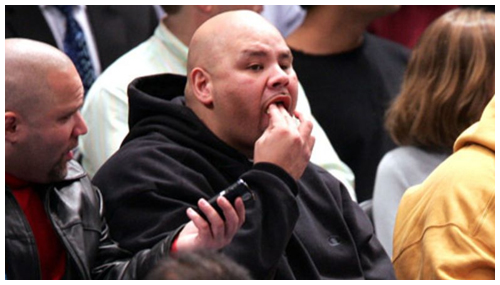 If Bieber’s career continues along its current trajectory, it not implausible to think people might begin taking him seriously as a musician. The Bieber haters will look for a new hate figure to target. Likely, the next teenage musician who’s a little bit shit and has a bad attitude. 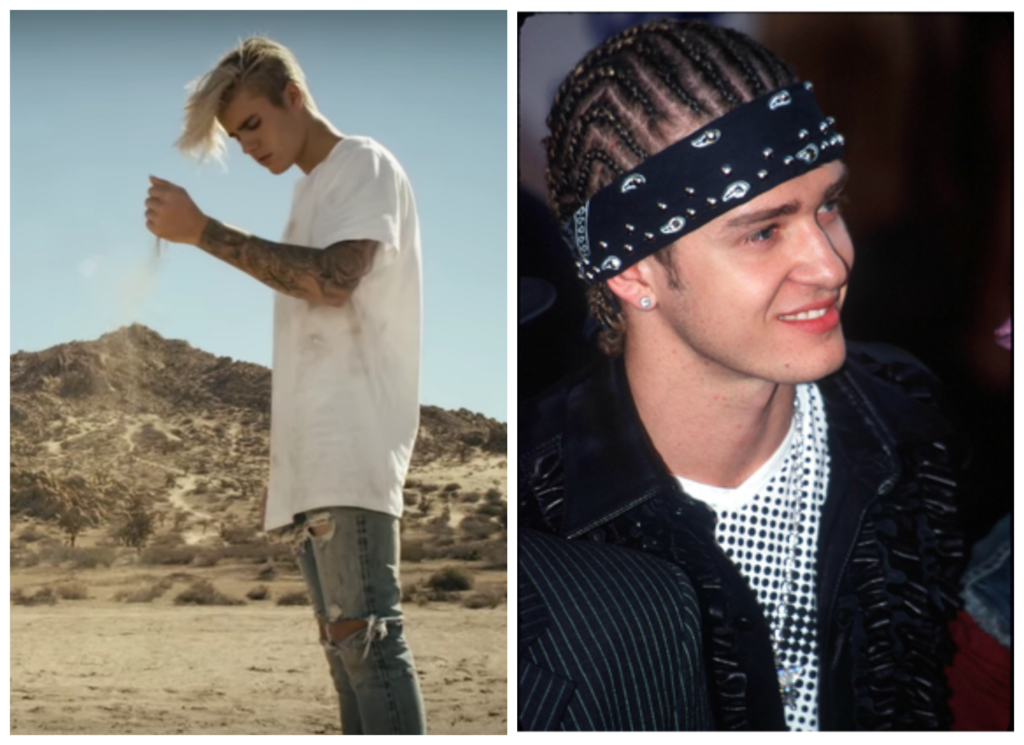 I’ve come out the closet as a Belieber, a weight has been lifted. My name is Jack Kavanagh and I like Justin Bieber’s new album.